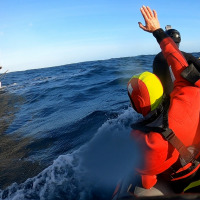 After being rescued from his liferaft six days ago by fellow competitor Jean Le Cam, PRB skipper Kevin Escoffier was plucked from the Indian Ocean by the French Marine National after jumping clear of his rescuer’s IMOCA 60 in a carefully choreographed manoeuvre early this Sunday morning some 360 nautical miles north of the remote Crozet Islands. Escoffier was quickly taken from a semi rigid inflatable to board the 93.5 metre long (306ft) 2600 tonne Floréal-class frigate which has a complement of 84 crew.

The mission was accomplished swiftly and without setback around daybreak at 0210hrs this morning (Crozet is +4hrs UTC) Le Cam wished his passenger Escoffier well and continued on his race, lying in sixth position at 396 miles behind leader Charlie Dalin (Apivia) and 15 miles behind fifth placed Ben Dutreux (OMIA-Water Family).

For his time and miles lost while out of full race mode, Le Cam will be granted a time compensation by the International Jury, as also will Boris Herrmann (Seaexplorer-Yacht Club de Monaco) and Yannick Bestaven (Maître Coq) who went to help in the search for Escoffier after his IMOCA suddenly split virtually into two when it buried its nose in a big wave.

Meantime Le Cam’s request for additional food to replace that required to feed shipwrecked Escoffier was granted and the 61 year old Le Cam who enjoys fine food took a bag containing dry crisprolls, salted butter and fine Henaff Breton pate. Escoffier will be taken back to Reunion Island where the Nivôse is stationed and is due to arrive there next Friday.

“Kevin is in great shape, he is going to enjoy a hot shower,” said Frédéric Barbe, captain of the Nivôse. “And so a great start to a beautiful day!”

At the top of the 29-boat fleet Charlie Dalin, Thomas Ruyant and Louis Burton all gybed on to the new north-westerly breeze which heralded the arrival of the new, active low pressure system. Burton had dropped a few miles to Ruyant and Dalin because of autopilot and other unspecified issues but he said today that the seas have evened out after a week of crossed, agitated waves. His autopilot issues had required him to helm his Bureau Vallée for long periods before finally effecting a fix in collaboration with his technical team.

Burton Burnt Out? Not really…..
“I’m pretty burnt out and I admit that I came close to having to abandon,” reported Burton this morning, now recovered to be back up to second, 13 miles ahead of Thomas Ruyant.
“Now the strategy is to try and stay ahead of the front. We are on it early. I have lost a bit of ground so I am not sure where I am but the idea is to go fast and as far as possible on this port gybe and either I manage to stay ahead of this front, which is going to be very strong and which would be good, or it go over us in about two days and then it will be a starboard gybe to just carry on the course. I have not seen the files from midnight, but those are 1800hrs show a transition that did not look great around the Kerguelen Islands. It could be pretty amazing if we can do it all on one tack ahead of the front, but there are going to be quite lot of manoeuvres.  What I have to absolutely do is tidy the boat before I get some sleep. Having a mess just leads to more problems, accidents. I am then going to just go as fast as possible. I tell myself that the others must also have issues to deal with and you just have to hang in there.”

Their dilemma, indeed that of all the lead group is a front which arrives next Tuesday, dark red spot on the weather maps yielding 45-50 knots and 7.5 meters wave troughs. Tomorrow they will have to make a choice.

“Either they go through the front and find themselves in the heart of the storm, or they slow down and the front will go faster than them”, explains Sébastien Josse, Vendée Globe meteo consultant.

Leader Charlie Dalin seems to be taking the more conservative option, as might be expected of a skipper with a 200 mile lead and a boat believed to be still close to 100 per cent of its potential as the fastest, newest most proven foiling boat which has already won last year’s Transat Jacques Vabre. He appeared to already have slowed down today Sunday.

Of this leading group of 11 skippers, all are wondering what to do. “I planned to do tack around a bit,” said Benjamin Dutreux (OMIA – Water Family), still impressive and keeping up with the race pace.

Some 450 miles further back to the west, smiles are back on the faces of Romain Attanasio and Clarisse Crémer. The 12th and 13th placed skippers – 16 miles apart –  are finally finding stronger winds after light airs slowed them (over 15 knots since this morning) and they have had fun chatting on WhatsApp.

Attanasio skipper of PURE-Best Western Hotels & Resorts remarked: “I have really picked up speed. The boat is hitting the waves, there’s a hell of a racket and what is good now is that this going to last for five days. When you miss a system and a bit surfing session during a transatlantic race you blame yourself but here on the Vendée Globe you’re actually happy as it gives you a bit of a break! “

Respite isn’t really on the menu some 600 miles further west. Alan Roura (La Fabrique), Stéphane Le Diraison (Time for Oceans), Armel Tripon (L’Occitane en Provence) and Arnaud Boissières (La Mie Câline – Artisans Artipôle) cross Cape of Good Hope today in succession after a spell of very light winds. They are seeing a very tough depression descending on them from South Africa from late today. “They will be stuck in front of the AEZ and have to go upwind as long as it does move further south,” notes Vendée Globe meteorologist Christian Dumard. “It is not looking like fun at all it really will not be really easy to manage,” confirmed Alan Roura, guest of Vendée Live this afternoon.

“Medallia is running again, I am gripping onto the sides of my seat with my elbows while I type, trying to stay in it long enough to get this writing done, there is the familiar hum coming from my rudders, the sea is roaring as it whips past my hull and once again we making miles to the East. It feels good to be moving. The temperature has really dropped in the last 48 hours. I am now wearing a hat and gloves all of the time and have two layers on under my foulies. One of the significant blows from losing a hydrogenator is the fact that all of my diesel now must be reserved for power generation. I have a diesel heater on board which I had planned to use sparingly, but as  my southern ocean comfort, when things got really bad and I needed a morale boost. No more dreaming of blown hot air for me, it is only going to get colder and I need to manage this with my clothing alone. I’m thankful at least that I did not skimp when it came to warm kit. I invested in merino wool underwear and thermals, I have multiple mid layers of varying types and the absolute rock bottom position is a full on wooly bear onesy, which though bulky fits under my dry suit and I have been warned will just make me too hot to sail. I think there will be days when I look forward to putting that theory to the test.”