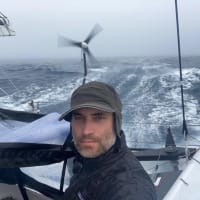 Britain’s Pipe Hare should cross the longitude of the Cape of Good Hope early tomorrow, her first of the Vendée Globe’s three Great Capes. Lying in 20th place she is chasing Spanish rival Didac Costa hard, just 12 miles behind the Barcelona firefighter who is on his third round the world race in five years, all of them on board his One Planet – One Ocean which started life as Ellen MacArthur’s Kingfisher over 20 years ago.

Ticking off her first Great Cape will be a significant moment for 45 year old Hare, who is based out of Poole, England and whose IMOCA is of identical vintage to friend and rival Costa’s. Her’s was built as Superbigou by Swiss skipper Bernard Stamm and his friends in a shed in Lesconcil, Brittany and launched 11th February 2000 while MacArthur’s Kingfisher was launched within the same fortnight on the other side of the world in New Zealand.

Just as the two IMOCAs are lifelong rivals – although Stamm had to abandon the 2000-2001 Vendée Globe on which 24 year old MacArthur led and went on to finish second  – so Hare and Costa previously raced Mini 650s against each other and finished within 40 minutes of each other the last time they did the MiniTransat.

Costa, who finished 14th on the last Vendée Globe, reported last night that he had hit something which he believed to be a whale although there was no damage to the mammal nor to his boat. As well as notifying other competitors via Race HQ, he also made sure Hare – who is sailing in his wake – was aware.

“ Didac messaged me yesterday to let me know he had hit something. It is really nice to have him there. We keep in touch. It is amazing for me to have him here as a pace setter but I have no intention of letting him go. That is for sure. I think Kingfisher (now Didac’s One Planet-One Ocean) is a quicker boat and certainly in the bigger breeze I am pushing hard to keep up. The biggest issue is in the moderate breeze this boat is still quite narrow in the beam. It just does not have power and righting moment. I really struggle then reaching in a moderate range. I can’t hang on to him. I have to work very hard in the light and heavy breeze I have to put the hammer down to keep up with him for sure.” Said Hare on today’s Vendée Globe Live.

Having endured a painful week in the Indian Ocean fighting to keep themselves, their boats and equipment intact in big, crossed seas and very gusty winds to 35-40kts, race leaders Charlie Dalin (Apivia) and Thomas Ruyant (LinkedOut) are finally finding a fast route east on the leading face of a fast moving low pressure system.

With flat water and strong North Westerly winds they are in ideal conditions which Vendée Globe meteo consultant and three times Vendée Globe racer Seb Josse said this morning might see Alex Thomson’s world 24 hours record run of 536 miles – set on the last race – fall.  If they can continue to keep pace with the front which is moving at around 25kts eastwards they could then catch a moderate wind flow from a high pressure at Cape Leeuwin to complete a dream sequence that could open them a massive lead on their pursuers. And they have indeed maintained high averages since last night, more than 20kts and so that means often surfing at 28-30kts. Ruyant has been on port gybe and so not missing the foil he had to cut away.

“The weather is almost sunny, it’s rather a good day” commented a relatively relaxed Charlie Dalin during the Vendée Live this afternoon.

But 600 miles back in the fiery depths of the low pressure system it is very windy with big seas, much more like the Dante-esque vision of the Southern Ocean.

“We have 45 knots and horizontal rain” reported fourth placed Damien Seguin in a video.

“I have never seen a sea like this, it is rough, it is very hard to go forwards, it catches the boat, the boat accelerates forwards surging to 29 knots but if you are too slow, the waves will catch up and explode on the transom it is hideous ” confirms Maxime Sorel (11th) reached this morning on the phone.

The nine boats sailing in Dalin and Ruyant’s wake were overtaken by the front  which had 50 knots in squally gusts. With huge confused seas racing is on hold and self preservation become the most important challenge.

“The big South is an endurance race that slowly wears you out” summarizes Josse.