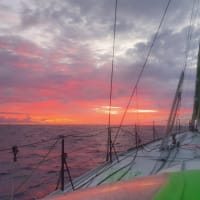 « It could have been a peaceful day yesterday, probably the last day of easy sailing in the endless, very present South Atlantic High. However, it’s rare that a day goes by without some issue or other. On my inspection of the boat, I discovered to my horror that the hydraulic oil reservoir for the canting keel had emptied itself into the engine compartment. Hydraulics is not one of my specialities, slightly behind the black art of electricity and electronics, though I did have a lesson from the team at Hydroem before the start of the race. Luckily the oil was mostly contained in one area of the engine compartment, so I siphoned it into a bottle, then called Halvard for advice (he must have been delighted!) and set about finding the leak. For someone who knows what they are doing, this would have been child’s play, but a little more complicated for me. Anyway, it turned out to be a broken seal on one of the keel ram hoses which was obviously not very accessible. I replaced the seal, and then put the oil back in the reservoir, and so far so good. That kept me occupied for quite a few hours and I have had some valuable practical experience, and I know a lot more than I did 24 hours ago!

While I was playing with hydraulic oil, there was a loud bang from the back of the boat. It turned out to be the dyneema fuse on the hydrogenerator, designed to break if it hits something. It took a while to find the identical dyneema to replace it as I don’t seem to have that small size in my spares. There was a piece being used to tie in the pouches just inside the companionway, so I stole that to make a new fuse. My new fuse is holding for now…

It’s daybreak and we (the boat and I) are still under the old front which we have been sailing in for the past 36 hours. At times it gets rather light, but the wind should start building later.

I wonder what surprise are in store for today! »