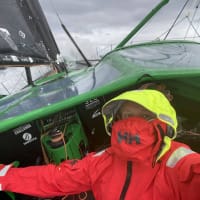 Early this afternoon, Saturday, Maxime Sorel  the skipper of V and B – Mayenne gybed at just 1.2 miles (2.2 km) from the AEZ giving Race Direction a few nervous moments at Race HQ in Les Sables d’Olonne. Had he actually crossed into the forbidden area, the Antarctic Exclusion Zone, he would have been subject to a penalty.

“He did scare us a just a little as it is unusual that a skipper gets so close, usually they leave more of a margin for error.” Smiled Jacques Caraes, Race Director. Sorel gybed at 1.2 nautical miles from the ice exclusion zone, then heading back to the North East.

The ‘Antarctic Exclusion Zone’  is set by Race Direction – in collaboration with CLS who track the ice – and it comprises a chain of 72 GPS points. This is fixed so that the skippers avoid icebergs and also are kept within reasonable working range of the Australasian rescue services at just over 1,000 miles.

Clarisse Crémer (Banque Populaire X) gybed 20 miles from the line this morning. “She took more margin while Maxime left virtually none”, explains Jacques Caraës. Four years ago, the Hungarian Nandor Fa almost crossed it. But in 2016  Jean-Pierre Dick did, not realising he had and was 20 miles inside. It did not stop skipper of StMichel-Virbac from finishing 4th in this edition.