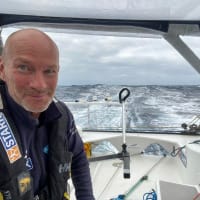 Ari Huusela’s objective today is to get STARK under the ‘600 miles to the finish’ mark, or as racing sailors know it ‘one Fastnet’. He has had a slowed night and is struggling for good rest but his mood is picking up with the breeze. And he would like some sunshine, proper sunshine….all good on STARK though and Huusela is proud to have his boat in great condition.

I am good but tired I stopped for a bit last night in the early morning hours and then I have not had good rest much after that, I had to do some work after that trying to keep the boat moving. It has picked up again and now we have ten knots of wind and we are moving again at nine to ten knorts. This should last another three to four hours so I can get another 50 miles towards the finish before the wind fails again.

I had a nice breeze until one or two o’clock in the night and then in dropped under 5 knots and that is when it is worst. It was quite light and shifting a lot. But now I have ten knots. With less than 700 miles to go it is good but I will struggle with light winds, normally I could be doing that in two to two and a half days so, yes, it is frustrating….
But in one week you should be in Les Sables d’Olonne finished and maybe with a hangover?

Hopefully not with a big hangover, maybe a small one, but I will be home at least.

The boat is very good and is going nicely. I am so happy with it, everything is still working, I have lots of fuel and the hydrogenerators are good and so if I want to I can use the heater as much as I want to. It is getting colder all the time.
I don’t think anyone will bring their boat back in as good condition as yours, that is an achievement?

Yes, that was my goal because of the personal financial crisis (laughs) to get here. I have to do it this way. Miranda was the same in terms of her approach. But the good thing here is that a next owner can take the boat and be training immediately for the Transat Jacques Vabre, they can get started.
Have you sold the boat?

Not yet but I hope to soon so that we don’t have to worry about things. I have tried to connect with Cali (Arnaud Boissières, who is based in Les Sables d’Olonne and who Ari bought the boat from) so I can leave the boat here and someone from his team can look after the boat and show it to anyone who is interested. Cali knows the boat well as he had it for a while. Rich Wilson bought the boat from Dee and then put it up for sale, Team Plastique  had it for Alessandro di Benedetto but could not get the funding to do the race, so then Cali had it  (or part of it) before he had a better option to buy the boat he has now and put foils on it. I bought it from Team Plastique. I like Cali he is a good guy who has done an amazing job on the Vendée Globes. He is amazing.
It will be light winds for the next few days?

The next 24 hours will be five to 10 knots and then a bit more then 12 hours to five knots. If the GRIB files are right it will build to 20 knots for the finish, 10 knots would be nice.
How does it feel to be the leader?

Laughs….To be honest I feel even more alone. I already felt lonely when Alexia got to the other side of the high pressure and soon was 1000 miles ahead. Then I felt quite alone, but until then I had always been OK. Now I am close to land and so there are a lot of shipping, going between Europe and the USA, every now and then passing me. It is OK.
The next milestone is 600 miles or one Fastnet race to go?

Yes, it would be nice to get under that milestone today. It should be possible in this wind. The I keep my fingers crossed that the light winds are closer to ten knots than five knots, at 10 knots it is OK. Five knots is not so nice. The annoying thing is having the waves against me, it is not so nice but the boat is still slamming a bit. I would like to have some proper sunshine, I have not had any proper sunshine for as many days.